Are you sick of trying to sell to people who don’t know or care who you are?

People who don’t see the value in what you offer?

People who never get back to you and who hang up when you call them?…

Well in this video I’m going to share how you can sell to people who already have budget and are qualified as they’ve already bought a similar product to yours already.

I’m going to explain, in a few simple steps, how you can walk into a competitors account and take their business right from under their nose.

The best way to share the insane power of converting your competitors accounts, rather than selling to people who haven’t bought before is with a quick example. So when I was selling medical devices, there were very few new hospitals being opened and every large hospital in the UK already had the equipment I was selling.

Now for a good chunk of that market I was in luck, they were already using my products and so the process of up-selling them to newer, more efficient equipment was easy.

The issue was that this wasn’t enough revenue each year to hit my sales target. I’m sure you understand the pain of knowing you can bring in a certain amount of revenue but you’re still short of your target.

So the only option available was to steal a couple of competitor accounts to add to my portfolio.

I thought this was going to be hard, I thought it was going to mean awkward conversations and doors getting slammed in my face… The reality was though that I actually found that it was far easier to convert accounts than it was to battle for the rare new business that popped up. This is because of the blue ocean effect.

Imagine two separate parts of the ocean. One is blue, one is red. If you were a shark and you were hungry for a kill, which one would you aim for?

Well lets look at both sides. In the blue ocean, a seal is injured, you notice it. You swim over and gobble it up whole. Yum, yum, thank you very much. Off you go to go and star in yet another shark bases horror movie.

This is what it’s like to take over a competitor account that has been ignored by the person that sold them originally.

Now conversely in the red ocean, here we have a seal that hasn’t been injured, they’re actually fighting fit and they’re not going down without fighting back.

So the first shark comes along and has a nibble, but doesn’t manage to eat the seal. There’s now blood in the water which attracts other sharks.

As sharks can smell a drop of blood from over 3 miles away, loads more of them join the hunt.

You then arrive and if you want your lunch you have to fend off all these other predators, you have to deal with a seal that is healthy and so fights back and so the effort to score the meal goes up tremendously. Because of the blood in the water and the ensuing chaos we call this the red ocean.

So with that gruesome analogy, in sales, you always want to focus your time in the blue ocean, and taking over competitors accounts, if done correctly is just that.

So lets run through the steps required to walk into hostile territory and steal an account from your unsuspecting competitor.

As we can see from the image on screen now, at a high level, there are two sales cycles needed to convert a competitor account. This is your competitors sales cycle and then your own.

The difference between the pain level that the customer is in at the end of each cycle is called the “value gap” and this is our leverage to get the conversion deal done.

As you can also see, the customer will have to go on a journey of ups and downs in their levels of pain before we can reduce it at the end of our sales process. This is the barrier to you getting the deal done that you need to get over with the potential customer.

So lets look at the steps in each sales process and this will explain what we need to do to convert the account.

Next, we come along and start engaging with this potential customer.

The second sales cycle (you)

The gap between the point where your competition left them at and the point where they are now is called the “value gap” and being able to explain this gap to the potential customer is what will get you the conversion.

A couple of things to note about the value gap –

So with all that said, to convert this customer to your product it’s a simple 4 step process of –

There we have it. Getting to and communicating the “value gap” is the secret sauce to converting competitor accounts, swimming in the blue ocean and really dominating your market place.

So to quickly summarise, here are the benefits of closing a competitor account rather than hunting brand new business – 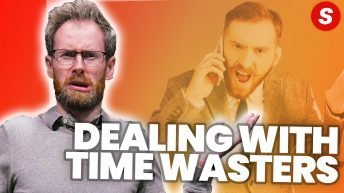 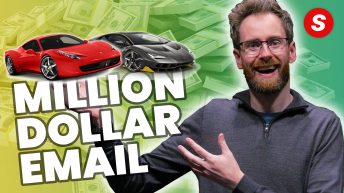