Salesman.org > Tips/Advice > Why The Greeks Suck At Sales (What I Learnt On My Summer Holiday To Greece) 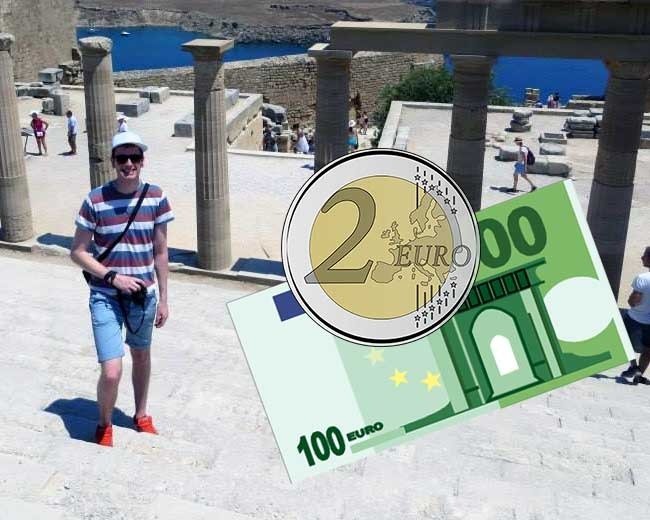 Rhodes is a Greek island just off of Turkey and its history is amazing, its weather was amazing, the number of times I was sold to was staggering and the amount of money they managed to pull from my pockets was pitiful.

Nowhere did the Greeks suck at selling more than in the old town square.

It was the busiest and most lucrative part of the Island and nobody had any clue how to sell. It was all cocky bullshit attempts at charming passers-by that felt manipulative and slimy.

Like sirens leading you towards the rocks to sell you a fake handbag and cheap kebab.

Elsewhere in Rhodes town my girlfriend and I had some of the best souvlaki and coffee we’d ever experienced but we never sat down to eat or drink in the old town square because we were discouraged essentially by the lack of salesmanship from the blokes trying to pull us in.

“These are the local ‘Lotharios’ that try and sweet talk you into their restaurants” my girlfriend whispered in my ear as if not to offend them as we walked into the main square.

There was a guy outside every restaurant, bar and ice-cream place fighting for your attention.

At the risk of sounding sexist, perhaps 20 years ago women liked the attention of an attractive young man, dark skinned and seductive eyed trying to lure them into his steak house with some charm and whit.

In 2015 however all I could observe was both men and women ignoring these sales people and then turning to each other to laugh together as they walk away.

Heck, the last restaurant I’m going to give my money to is the one with the guy outside trying to chat up my girlfriend!

The mistake they were making was that they were mistaking a cheeky comment as a way to build rapport – the essential ingredient in selling a meal.

They could have opened the conversation by offering free bottles of water, giving their local knowledge to tourists not looking to eat (as they’d have likely come back for food later on) or even handed out some kind of map to help people find their way around.

Anything would have been better than shouting, “nice view, ice-cream?” at passer-by’s.

Hustle is important but not everything

To be fair to them, these guys were hustling like mad! Long, long days in the blistering hot sun (like every Brit who travels I spent half the holiday complaining it was too hot and in the 48 hours since I’ve been back in the UK I’ve been complaining that it’s too cold).

However having sat down with a double scoop of banana ice cream to listen in to how one guy was trying to sell his restaurant to people walking by  it was clear he wasn’t a trained salesman. He was missing the most important piece of the puzzle.

Structure, methodology, any even remote glimmer of a sales process.

He approached every attractive female, meh some men, random age ranges of people.

He opened with random lines that all sounded canned and as if he’d repeated them day in day out over the summer months of the past decade.

He had no process to work from.

There was enough people walking past that he could have easily tested a few ways of giving value first, building rapport, having a human to human interaction and then closing the deal.

A few days of doing this and he would have been way a head of the competition who were stood around him.

There were hustlers all around but they were all pulling in opposite directions. Because they all wanted my attention, none of them got it.

The simplest thing these guys could have done to sell more would have been to team up.

As a pasty white (even after a week in Greece!) Brit I didn’t spent too long walking around before I grabbed a frappe or ice-cream as we wondered around the town.

If the person selling me the ice-cream would have told me about a bar around the corner that serves great drinks, isn’t too loud and has lots of shade I would have likely called in.

Not taking advantage of partnership opportunities is something that I still struggle with even today with Salesman.Red.  There are a TONNE of companies in the sales industry that could help us grow quicker in exchange for coverage on our site and I know I don’t make enough time to seek them out.

For the salespeople of Rhodes town this would be a very quick win.

Referrals are the easiest people to sell to after your own customers.

BONUS: Aim for ecstatic customers, not average ones

I’m 6ft 4in and so when I turned around to see an ‘extra leg room’ seat one row behind me completely free at the beginning of the 4 hour Thompson flight I gave a sigh of relief.

I’ll take a picture and tweet out how comfortable I am. Maybe even mention it in a blog post like this. As a member of the cabin crew strutted down the aisle after we’d taken off I thought I’d better ask first before I moved seats.

“I’m sorry, other people have paid more to sit on that seat. It might annoy them if you sit there having not paid extra…”

I looked at the stewardess in shock. It was like throwing a big piece of cake in the bin which is sat next to a hungry homeless person because you’re worried he might not be a fan of chocolate and cream.

Any problems could have been negated by the smartly dressed cabin crew member asking the old couple sat there if the tall gentleman they were talking to before take-off could sit in the completely empty seat next to them as his bony knees were pissing off the girl in front by sticking into the back of her seat of him.

This would have made me an ecstatic customer, telling everyone about how epic Thompson are, how they went out of their way to make me more comfortable.

Rather than making me feel meh and having a completely neutral response from the people already in those seats who literally could not have cared less either way.

That said, the people of Greece are lovely

Now let me be clear, not every local business person made me feel gross whilst I was in Rhodes. Quite the opposite. The Greek people are naturally friendly and family focused. The owner of the hotel we stayed in couldn’t have been more accommodating (I’m going to leave him an amazing Tripadvisor review as soon as I finish here).

But the hustlers working in the town need to up their game before they’re completely replaced by tripadvisor.