Salesman.org > Tips/Advice > Why Now Is The GREATEST Time Ever To Be Working In Sales 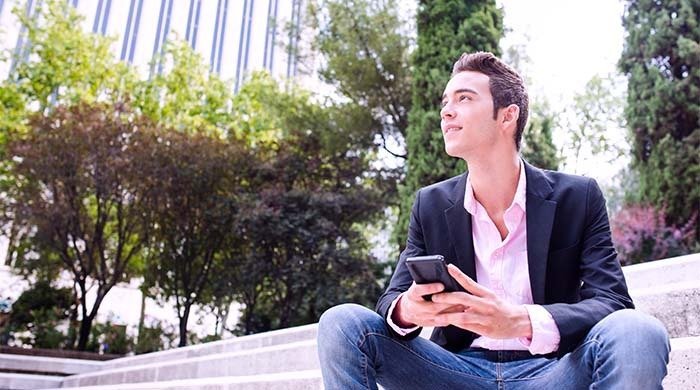 These are the words written in capitals, underlined like a crazy person, trying to run their pen out, staring back at me on the show notes from my recent interview with Patrick Cassady, the VP of sales at Clearslide.com.

Intrigued? You can listen to the full episode by clicking this image –

As with all of my favourite interviews on the Salesman Podcast (subscribe for free on iTunes) I learned more about sales in the 30 minutes of conversation than from any book, video or course.

What made this interview different was that Patrick doesn’t spend his days sat in an office, researching and writing books (and trying to sell them to my audience).

He is on the front lines.

He’s in the muddy tent, shaken by near misses, passing forward strategy and insight to the troops so they can get the job done.

His opinions on how technology is changing sales is coming from real world application by his sales force.

This is what I learned from our conversation –

Patrick summed up every advantage salespeople have in the internet age with in one phrase.

I immediately made comment in the show that this should be a the title of a book, a series of webinairs, a model of best practice.

Never before have salespeople been able to send content which adds value, track when it gets open then engage with the prospects seamlessly at the right moment.

Welcome to the future of sales.

But lets put this into context…

I used to feel physically slimy when I’d forward a prospect a cold email (never mind when I’d cold call them).

But I’d suck it up and make it happen because sometimes I’d hear back.

However I knew it set me off on the wrong foot with the prospect and I had to work extra hard to get them back on my side even if they did respond.

Because of the internet we have a solution, an genuine excuse to be making that first contact whilst adding value to the prospect.

It takes a little longer as you have to research the prospect, their hobbies, industry and contacts but when you can send them a piece of content that adds value rather than sending your pitch, levels of engagement sky-rocket.

It’s the difference between sending a generic, typed, non addressed letter and forwarding a beautiful, hand written note in calligraphy. One is going on the fridge the other isn’t even opened.

Once the prospect is engaged rather than annoyed you get to take full advantage of technology.

B) Alerts – The real-time journey starts

When technology disrupts what salespeople have been doing for decades and gives those who embrace it a clear competitive advantage, I get excited.

Once your email has flown from your outbox, one of three things happen –

Before tools like Clearslide were available you’d be guessing the outcome.

It’s a Schrödinger’s cat paradox as the only way to know is by asking and the only way you can ask is to send another cold communication which confounds the problem.

With technology however you can be alerted when an email is read and so you can be in the right place, at the right time and respond.

A few weeks ago I got a pop-up on my screen.

I was confused. It was 1am in the morning, I’d been editing podcasts for 8 hours straight but I was certain I’d not emailed this prospect in over a year.

In fact I had no idea when the last time I’d tried to contact him. When I opened my email and searched it was over 18 months prior.

Now I had some intel.

That he was interested in where we left our conversation and so I immediately searched for an article I knew he would find interesting and forwarded it over.

I got an immediate reply stating that he had some end of year funds that he needed to spend within the next few days and he was pondering if sponsoring a podcast would be an option.

I closed the deal and received payment 2 hours later.

As Jack Bauer says, “all events occur in real-time”.

The Power Of Priority

Value adding content, alerts and the ability to communicate in real-time with prospects are things the salespeople of old could have only dreamt about.

Forget the headlines of “Prospects are only engaging with salespeople 60% of the way through the sales cycle.” or any other nonsense.

There has never been a better time to be working in sales.