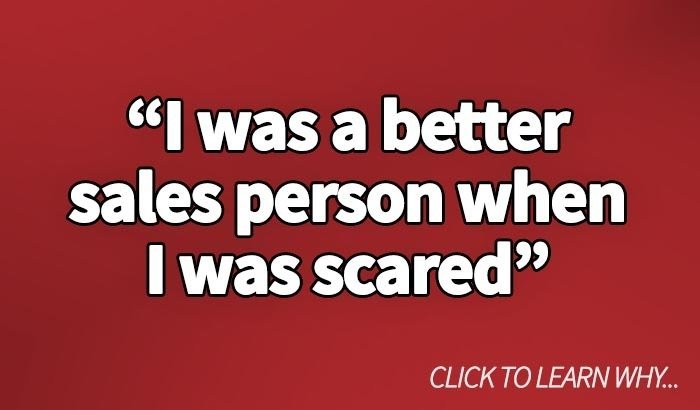 The instant I got my first sales job, I was a great sales person.

Not wanting to brag or anything but I was pushed in the deep end and entered with a double somersault and no splash.

Because I was scared of rejection.

The idea of asking someone a bunch of questions, making sure my product fit their needs and then moving to a soft close made total sense to me.

Because I didn’t feel I was worthy of asking for their business outright.

I was “consultative selling” as I didn’t want to hear a no from the prospect. If they weren’t the perfect fit I just moved on.

Because confrontation wasn’t in my nature.

Long story short, very quickly I built a great base of customers who regularly referred me new business because they knew they could –

I was winning by doing the opposite of what every sales guru out their was preaching at the time.

I Had Money But Was Miserable

I would spend my Friday evenings driving around the South East of the UK delivering loan endoscopes, lugging around 20kg camera systems and stroking surgeons ego’s.

And guess what, I smashed my sales targets.

But I was miserable.

Not because of these overly hairy, alpha surgeons who were on my back constantly. I thought that was normal.

It was because my sales manager couldn’t hold back the barrage of abuse that was coming from his managers any longer.

“He’s loaned out HOW MUCH demonstration equipment?!”

“He’s allowed XYZ competitor to take the business without a fight?!”

I got ambushed one time by a sales director who called me into his office without informing my sales manager.

No-one had my back. Not even myself. I was scared of confrontation!

I sheepishly sat down opposite his bland, sterile desk and smiled to myself thinking I was going to get a pat on the back for hitting my target that quarter.

All I got was integrated about why I’d lost an account. He wasn’t even really asking any questions, he was ranting in rhetorical form.

The account was a private practice. I lost around £35k worth of business. I’d consulted with the surgeon who was placing the order and they just simply didn’t have the budget for our premium products. They wanted ‘help’ with the cleaning and maintenance of the equipment that we couldn’t provide.

To me it was a no-brainer that I shouldn’t be spending my time focusing on him.

Yet the sales director criticised my lack of hustle. He called me weak under his breath as he sipped his tea. I’m certain he did.

I wasn’t phased. I’ve the ability to go into my own little shell when I’m getting a telling off. The insults ping, ping, ping off. I just stare back into the aggressors eyes, pondering what they’re really stressing about.

It’s almost always nothing to do with you.

The affair they’re having. The scratch on their car. The shouting at they’re facing over nothing from their own manager in the next mutually convenient 30 minute calendar slot.

30 minutes of verbal rocks being thrown at my impenetrable, underground military bunker of an ego. Not even a dent.

I did come out of the meeting wondering if I was being too soft with my sales approach. Contemplating whether I should be more of a “closer”.

Becoming the stereotype that I hate to deal (with as does everybody including you right?).

For the next month I went in hard. Every scrap of a deal, I was all over it. Picking up an extra £5k here, £15k flexible endoscope there.

I read a bunch of books about influence, persuasion and closing the deal no matter what. I’d tattooed Grant Cardone’s “who’s got my money” meme across my consciousness.

Out went questions, in went closing techniques designed to trap the prospect into thinking they needed my product, even when there was alternatives.

Another £3.5 order or light cables. Cheeky £20k order for an updated camera monitor.

Then the shit hit the fan. I was the last to know about it.

A £450k order to convert a full wing of hospital theatres to our interrogated surgical camera solution had fallen through.

This was a prestigious hospital just outside of London and so my sales manager had been involved in the deal. That £450k could have easily turned to millions with further updates over time.

The response from the buyer?

“I’m sorry, we just haven’t seen Will enough recently. He went from hot to cold with regards to helping us out with loan equipment as we made our purchasing decision”.

Pushed further she went on to say that all I talked about was “sealing the deal” which was a marked difference from how the relationship had started.

From the “good guy” that closes the big deals to the “closer” who scrapes the bottom of the barrel.

From consultative selling to forcing quotes down prospects necks because I was told my approach was wrong by someone I assumed knew what the hell was going on.

That director likely hadn’t sold a product in decades.

I hadn’t chosen my mentors wisely enough even though I knew instinctively I should be selling the way I’d like to be sold.

If something is works, keep doing it.

Sales, relationships, life is as simple as that.

Sure experiment and refine but don’t give up on something because in a nicer suit who hasn’t sold anything in 15 years suggests you do as they spit in your face during a meeting.

I wasn’t being soft like I thought I was.

I was treating my prospects as they should be treated. As a partner in transaction. Not the lock to my own personal wealth that I needed to manipulate and crack.