The Top 10 Salesman Podcast Episodes Of 2016 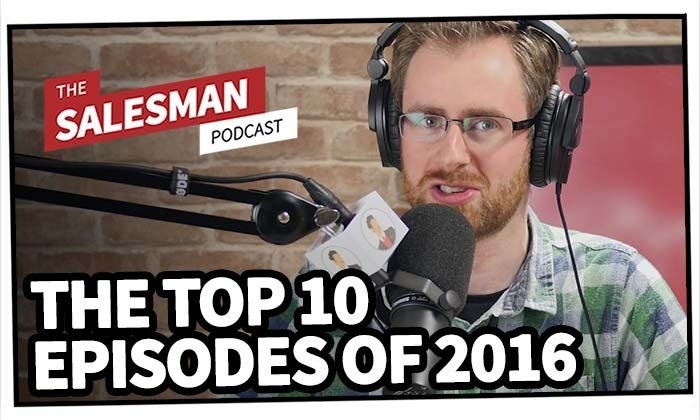 A couple of weeks ago I invited #SalesNation to vote on their top 10 episodes of 2016.

Over 800+ votes later and this is the result. I’ve not put the list into a particular order but I have to agree, some of my favourite interviews as the shows host are included here too.

Just before we jump into the top 10, a special mention goes out to the very timely episode I recorded with Owen Fitzpatrick where we discussed the upcoming Conor McGregor fight. This was the most downloaded episode of the year with over 55,000+ downloads!

How To Sell Like CONOR MCGREGOR (Influence, Mindset, Success Secrets) With Owen Fitzpatrick

Finally, I just want to say a thank you to all the guests that joined me on the podcast over the past 12 months, our show sponsors who keep my lights on and allow me to put out all this content and of course, the biggest thank you to each and every member of #SalesNation who’s tuned in.

In 2016 you very literally consumed multiple MILLIONS of hours of the podcast which is incredible! In 2017 I’m want to up our game and that number considerably.

The Rule Of 37% (If You’re Not Using It, You’re Losing Money) With Jake Reni

Why Must Put YOURSELF Before The Customer With Claude Diamond

The Future Of Sales (Artificial Intelligence, Snapchat And More) With John Barrows

How To Improve Your Sales Swag With Aaron Marino

Should We Listen To Sales Influencers Or Practitioners? With Jack Kosakowski And Rob Jeppsen

How To Get Your Sales Emails OPENED! With Ian Brodie

How To Become A SALES HUSTLER Anthony Iannarino