This Question Will Make You Better At Sales

Want to get better at selling in two seconds? Easy peasy.

Ask potential buyers, “What’s stopping you solving this problem for yourself?”  You’ll eliminate objections AND set yourself up for an easier close with just one phrase.

But hold on—asking the question is only half the battle. To get the right effect, you need to know how to get to the point of asking it. That’s where the real magic happens and that’s what we’re covering in this video.

Now, buyers often give objections because they think they can solve whatever problem they have by themselves. They don’t need your help. So why would they buy your solution?

But the truth of the matter is, if they could solve their problem on their own, wouldn’t they have done it by now? Instead, something’s missing. Something’s holding them back from solving their own pain points. This, my friends, is what’s known as leverage.

If you can get prospects to realize they can’t do it on their own, you’re in a fantastic selling position. AND you’ve also eliminated a slew of sales objections that you would’ve had to deal with later on.

But before you can drop this bombshell of a sales question, you’ve got to start by…

With the right leads, closing is easier. Prospects are more enthusiastic. And the chances of a busted deal are far slimmer.

Now, there are plenty of acronyms for qualifying frameworks out there. Each more complicated and confusing than the last. But when you get down to brass tacks, each focuses on three major questions:

That’s it. Three questions. But how do you get that information out of prospects in the first place?

The Selling Made Simple Academy’s Diagnose Framework does a fantastic job of guiding you through how to get those answers.

This eight-step model includes everything you need to ask on a discovery call. 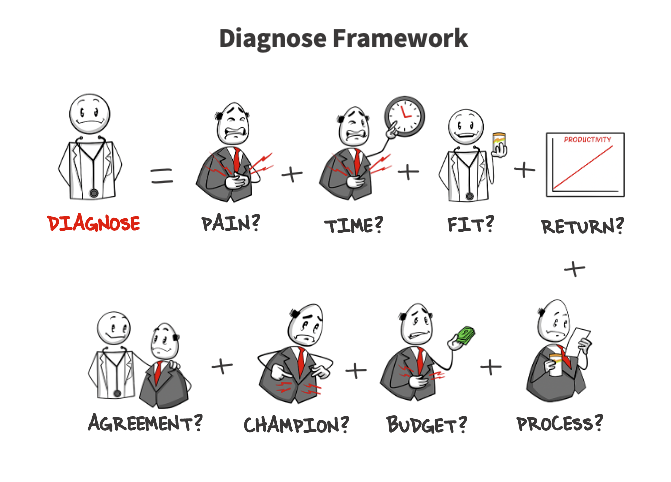 And whether you’ve gotten a verbal commitment that’ll lock buyers into the deal.

The info you learn through this framework ensures you’ll only be working with qualified prospects that are itching to buy.

Once you’ve done that, THEN it’s time to move on to step two…

The most common objection most reps face is that buyers think they can solve their own business issues themselves. It’s especially common among small to medium-sized businesses because they believe they can save some serious dough by handling it themselves.

Once we’ve qualified the prospect, the best way around this objection is to ask them to their face…

“You know the issue, you know where you want to go, what’s stopping you from solving this yourself?”

It all comes down to one or more of those three. That’s it.

What’s important here isn’t necessarily that you know which of these three is stopping them. Though as we’ll see in the next step, that knowledge is incredibly useful in closing later on.

Instead, the magic here is that the buyer admits they need help. They’re making the need real. Because they’ve stopped, thought about it, and said out loud why they can’t do it themselves.

That shift in mindset is powerful. It turns you from a greedy salesperson into someone who’s offering real, true value. You instantly change from a predator—somebody trying to steal their money—to an asset that can solve their problem. And that my friends is huge.

So, the prospect has mentally and verbally agreed they need help via time, expertise, or motivation. Now what? Now you have everything you need to close the deal by…

Depending on what your prospect said was holding them back—time, expertise, or motivation—you can now structure the rest of your process and closing strategy around that answer.All you have to do is continually circle back to this pain point as you nurture and close on the deal.

Don’t have the time to do it yourself? No problem, we can do all the time-intensive work for you. Is expertise the hangup here? We’ve been doing this for decades. Motivation holding you back? Let’s look at the risks of not dealing with the problem.

The best way you can incorporate this info into your closing strategy is by using the Selling Made Simple Academy’s Storytelling Framework. Let’s take a quick look at what that entails.

This framework uses the power of storytelling. People are moved by stories, entranced by them even. And when you weave some skillful storytelling into your closing process, it unites both the logical and emotional sides of the prospect’s brain.

Let’s look at the framework.

Describe the buyer’s current reality by pointing to a past client you’ve helped. One that was suffering the same pain points your current buyer is going through. Growth stalling, inefficient teams, whatever. What matters here is that they’re pain points that resonate with the buyer. It’s what they are experiencing too.

2. Dig Into the Unresolved Pain

Dig into the unresolved pain. Now is when you “twist the knife”. Your goal here is to make the current prospect really feel what your past client was going through. As a result, they’ll also feel what they are going through more deeply too.

You can do that by adding more detail. What are the consequences of this pain? Who does the prospect look stupid in front of because of it? Who’s judging them? And what’s on the line here?

Hitting the success blockers. What held your past customer back from fixing their problem? HERE is where you incorporate your buyer’s response to the magic question. Was it time? Was it expertise? Was it motivation?

This is where we really connect the dots and drive the similarities home. Once you do that, you can move on to step four…

Illuminating the future reality. How was your customer’s life different after they overcame the success blocker? How was it better? Were they able to achieve or even outperform their professional goals? Did their stress levels drop? Did the higher-ups recognize all the hard work the hero went through to achieve these results?

The rosier the future, the more it’ll drive enthusiasm for the buyer.

Building the reality bridge. It’s time to tie everything together. It’s time to explain that you are the guide/mentor that took the hero from their current reality to their better future reality.

It was you that let them bridge the gap across their success blockers. It was you that has the time, expertise, and motivation to get the prospect from where they are now to where they want to be. You are the Gandalf to their Frodo.

And of course, you can do the same thing for the prospect too. You can make them the hero in their own story. All they have to do is say, “yes.”