The 1% Rule For Improving Your Sales Skill 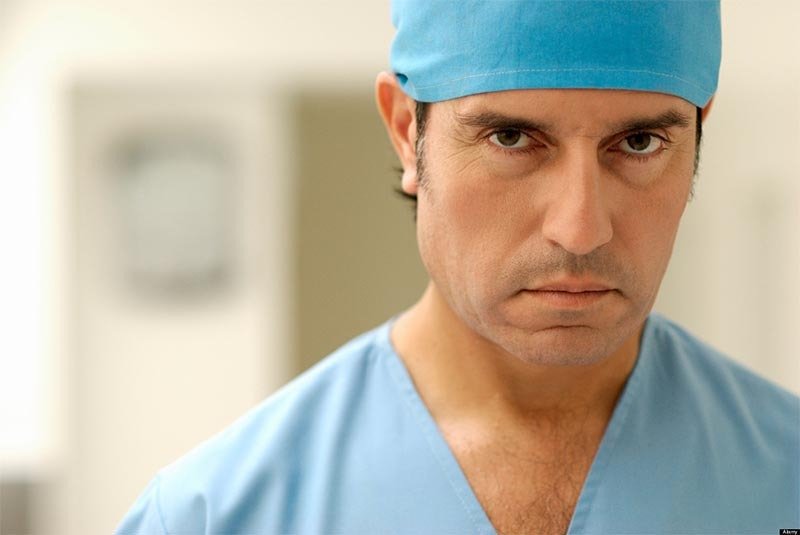 The surgeon turned, stared me down and asked me “what is the angle”?

I had no idea but I knew that if the answer wasn’t 45 degrees the patient he was operating on was going to be in trouble.

Not, I forgot to return a customer’s call trouble or the other little things salesmen get told off for.

The surgeon was performing key-hole surgery and I was meant to be observing. I had just started in a medical device role and I was out doing some field based training with one of the top salesmen in the company.

This salesman knew the surgery wasn’t going to plan and so he stepped out to ‘make a call’.

He left me right in the shit.

The surgeon was handling an endoscope (a tube with a camera at one end so he could see inside the patients stomach) and he needed to know what the angel at the end of the tube was.

The patient was bleeding internally. It was serious.

If the angulation was more or less he wouldn’t be able to see clearly which meant he would have to scalpel a huge gaping hole across the patient’s stomach and then reach inside with his gloved hand, pinching the bleeding artery before any more blood was lost.

I could feel the blood starting to drain away from my face. My racing heart was pushing it towards my muscles so I could run away and hide in a stock cupboard.

He asked again but this time I felt like his eyes were burning a hole in the back of my head, “what is the angulation of this endoscope”?

Did I lie and tell him it’s the magic 45 degrees he wanted? Heck a couple of degrees either way couldn’t have made that much difference right?

Or did I run off to find the sales rep who should have been in there to support the surgeon (and me) and throw him to the wolves?

Tail Between My Legs

I bolted, straight through the air tight double doors, past the anaesthetist who was lay back in her chair solving a crossword and sprinted towards the main reception.

My colleague wasn’t on the phone, he was chatting up a nurse.

She was hot too.

I dragged him back into the operating theatre but it was too late.

The surgeon had already cut a 6 inch hole into the patient and he literally had his hand inside her.

My mind was blown at the sight. It didn’t seem real.

The 1% Rule To Improve Sales Skill

The surgeon sat me down after he’d wrapped up the procedure as he could see that I was a little shaken.

I started apologising. All the usual excuses a sales guy makes but this time someone’s life was at risk. Or so I thought…

“I haven’t done that part of my training yet”

It turns out that the endoscope has the angle written along the side of it.

The surgeon was testing me to see if I’d bullshit him or if he could rely on me in the future to give him honest advice.

He taught me a lesson – Never try and bullshit a surgeon.

My sales skill improved by (at least) 1% that day.

Sales might be the ultimate skill to master. However it takes time.

It’s not something I’ve ever made leaps and bounds of progress within a short period of time.

It’s those lessons that move me along 1% that have the biggest impact over the years.

Like the time that the customer went straight to my boss to complain when I ignored her email for a week. This taught me to reply to contact promptly.

It happened when I was in trouble for not doing my expenses on time and I was late for a client meeting which the big boss was attending.

He had driven 120 miles to get there and when he called to see where I was, I had to explain that I hadn’t left my house yet.

It was nearly the final straw that got me sacked.

I survived though and learnt that even if you don’t know the answer to a question, just respond and explain you’re looking into it.

Send something, anything and it will get people off your back.

Over time these 1%’s really start to rack up.

The only way I’ve found to rack up these 1%s faster is to fail.

To get off my arse, out of my comfort zone and risk failure.

It’s only when I’m at risk of looking like an idiot that I know I have the chance of racking up a couple more percent .

I recently called a CEO I was trying to sell to so many times without getting a response back that he had his legal time email me telling me to stop.

I learned that there is actually a limit on the number of times I should follow up.

I once walked into a national sales meeting (all 200+ sales staff staring blankly at the sales director for 5 hours) late, stinking of beer.

I learnt that there are some corporate rules such as – if there is an open bar you can drink as much as you want, be as much of an idiot as you like but you must be on time for the meeting the next day – that can not be broken.

Each 1% involved a little pain but they stack up and the pain is always worth it.

Making The Most Of Each Day

I don’t believe in God or that each day is a gift from some creator. However I do believe that I need to make the most of each of them.

I know that if I can improve my sales skill 1% each day then after 3 months I’m already nearly twice as good as I was before.

I know that my competition are not trying to improve themselves.

They’re scared of failing and getting out of their comfort zone.

In 3 years I’ll be 1095% better at selling than I am right now if I continue moving forward little by little.

I may be mentally scarred by the image of the surgeon sticking his hand into someone’s chest but I’m grateful that it gave me the opportunity to grab my 1% that. day.