How To Use Influence To Sell / Part 1

In this two part episode we’re running through the principles of influence and how they can increase your chances of getting a deal done.

So if you’re ready to learn the skills of influence so you can go get your neighbour to give you a couple of rolls of toilet roll, from the 47 packets they’ve hoarded in this crisis, then hit that thumbs up button and lets get into it…

The first principal of influence is the principle of reciprocation. This law describes the phenomenon that when somebody helps us, your brain is wired to want to help them back.

This comes from the days we lived in tribes and really relied on the tribe to survive. Our brains became programmed to put the tribe first before our own selfish needs by giving back to an equal amount that we took from it.

And this principle of reciprocation seems like something that salespeople like you and I can use to get deals done, right? You just give the prospect a lot of value up front and they will have to give you the business later on? Well, it’s not as simple as that.

Because humans are so sensitive to the law of reciprocation, often times we will avoid allowing somebody to give us value, so that we cannot become indebted to them.

So in your sales role, you should focus on giving a small amount of value, and then closing the next step rather than giving masses of value upfront and then hoping that the prospect will give you what you want in return later.

So using the systematic selling process as an example, we create a customized message for the prospect, this teaches them something new and opens their worldview that their business could be different by working with us. Then before we go any further, we closed them on a formal meeting to discuss things in more detail.

We make one step, then get the prospect to confirm the value and that they want us to proceed before too much recprication debt gets built up. This process also starts to build up the principle of consistency which we’re going to cover in a minute.

Then we go through the next step of the systematic selling process and uncover the rules of the game and the prospects reality gap, before again closing the prospect and getting them to agree with everything that has been discussed so far.

This breaks up the sales process into smaller chunks and it stops the buyer being overwhelmed with a feeling of reciprocation to us that might otherwise stop them moving forward with the deal.

Next let’s take a look at the principle of consistency.

The principle of consistency exists because of our egos. When we buy into a thought pattern and start going down one pathway, our brains don’t like to either admit that we might be wrong or change our opinions once they have been set.

We see this with politics and religion.

Most people are brought up with certain religious and political beliefs and then because of the principle of consistency they spend the rest of their life avoiding other alternative opinions in case they conflict with what they think they know.

This leads adults to believe that they’ve made their own decisions on these things when in reality they’ve never really questioned them.

This principle of consistency is one of the reasons why the systematic selling process is so powerful. ## NEXT SLIDE ## When the prospect gets our customized message and they agree to a meeting, they’ve now started down a linear process of moving towards the sale.

Whenever they start to move away from this predetermined path, our job is to put them back on it.

As the prospect goes further through the sales process, after you have overtly and assertively asked them if they agree, the more chance they have of closing at the end of it.

As a bonus tip, the principle of consistency has been shown in scientific studies to be even more effective if the person agrees with you vernally rather than through email or text. So get your potential customers on the phone and don’t shy away from asking them if they agree with what you are proposing throughout the sales process.

Final principle of influence that were going to talk about in this video is social proof.

The influence principle of social proof exists because our brains are lazy. Our brains take a tremendous amount of nutrients and glucose to run and so anytime the brain can fall back on a rule rather than actually do some processing means that they can save valuable resources.

So a hardwired rule that we have as humans is that if everybody’s doing something, it is probably the correct thing to do.

We can see this very clearly in the UK now with the current crisis. People see in the news that others are going to supermarkets and hoarding food, so your brain thinks, because everyone is doing it, you should as well.

A few days later, the whole of the UK is out of toilet roll because people are hoarding it like idiots.

So how can we use the principle of influence to get more deals done? The best thing you can do is to get testimonials from your best customers. As soon as you close a deal, ask your new customer over email what benefits they think they’re going to get from working with you and then save the document.

This is your social proof that you can use to convince new prospects that they should do business with you. Because if all their peers are working with you, they should too, right?

Are you using testomonials throughout your sales process? Leave a comment below and let me know. I can put together a video on that if it’d be useful.

Something cool happens when you start asking for testimonials from your customers… you start to scale your sales success.

When you’re prospecting the emails have four or five video testimonials at the bottom of them, your response rates instantly go up and every other part of the sales process converts higher as well. This means your success starts to build on top of itself and sales becomes easier over time.

So there we have three of the six principles of influence –

Make sure you are subscribed because in tomorrow’s video were going to run through the next three principles of influence and one of the is more powerful than the rest of them combined. 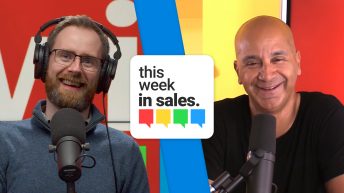