How To Talk To Anybody, Anywhere (And Build A Network) 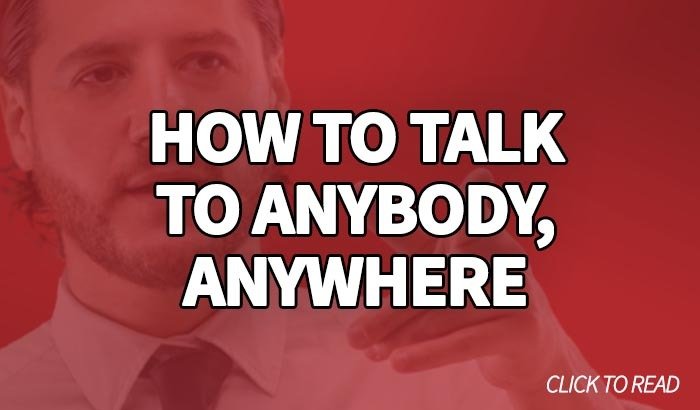 I’ve never have had that many friends.

Until I started the Salesman Podcast I never had a large business network.

There’s a couple of reasons why –

I still have a problem asking people for stuff. I’m happy to ask for the business. To discuss money. To close the deal.

But I’m scared of asking for help.

I feel like I’m sucking the life out of a conversation when I turn it on myself, even though I’m happy to spend hours on the phone mentoring members of my audience each week.

I give away so much free time and content to help people that it seems dumb that I should be so worried about asking for a little in return.

Asking for help is crucial to building a network.

I share how I got over this in a minute.

How To Talk To Anybody

I wasn’t gifted by the ability to sit down and start a conversation with random strangers.

As a kid I’d happily sit in awkward silence.

I was happy to be an observer. Looking at the world but having no effect on it.

When smart phones first came out I was in University, they changed the game. I now had a socially acceptable way of ignoring random interactions as did the rest of the world.

This was great until I started my first sales job and very quickly realised the importance of having a strong network.

I had to make a shift from nose ground into smart-phone at all moments to networking pro.

Fortunately I was lucky enough to have a networking superhero in the family.

I was gifted with a Mum who could seemingly strike up a conversation at any moment then laugh and chat for an embarrassing amount of time.

When I realised that both hot girls and potential customers weren’t going to get up and talk to me without me doing some work first, I started studying Mum to see how she managed to grab peoples attention and transition into a conversation naturally.

If you’re boring I don’t want to talk to you. If you look weird or intimidating, you better be even more interesting than I expect.

It’s a really bad habit but I watch and then fall asleep to a documentary every night. It takes about a week to get though each one but I know so much crap about so many topics because of this. It makes me an interesting dude to talk to.

The first step in the interaction with a random stranger is a weird one for us Brits.

Social etiquette dictates we should be miserable.

“Hey, how’s it going?” should be met with one of the following –

It sets the conversation off to have a miserable tone. Not what you want to be associated with.

Want to see an Englishman recoil, get nervous and have eyes as wide as a rabbit in headlights?

Just reply “I’m GREAT! Are you having a fantastic day?”.

So this is context dependent but it’s always better to be positive as you enter into the conversation.

Have Something In Common

My Mum seemingly had something in common with everyone she ever sat next to.

It was a weird phenomena. How can this be the case? All of our lives vary so wildly.

It was literally as simple as that.

This underground bunker is nice isn’t it? When did you realise that artificial intelligence robots were going to take over the planet? Why/when/how come?

I’ve used this at conferences when I was working as a medical device sales rep.

There’s a bunch of great companies here today isn’t there? Do you enjoy working as a surgeon? Why/when/how come?

Keep the conversation about them.

Create a loop of open ended questions that are followed up with why/when/how come and at some point the conversation will come to an abrupt stop.

This isn’t a “OK enough with your tricks, get away from me” stop.

It’s a “holy crap, I’ve been talking about myself for 5 minutes, I should really ask him something about himself to be polite” stop.

By adding real value through a selfless conversion you’ve guilted them into asking you “and what do you do”.

Here you give them a 10 second elevator pitch.

Don’t have one? Here’s a few resources – How to Write an Elevator Speech / Crafting an Elevator Pitch

This process will stop you being bored at the bus stop or waiting in a queue but it won’t help you to close more deals.

Nobody closes a deal within that initial conversation (no matter what they say in the marketing spiel of their book or course), you need to grab the persons details so you can follow up and network with them over a longer period of time.

Networking consists of, giving value and taking value. Which brings me back to my issue of…

Getting Over The Ask

Not being capable of pushing and pulling value both ways has really hurt my ability to build networks in the past.

The reality is that having a large network in your industry is the best bang for buck way to make selling easier.

To get over this issue with asking for help, I looked for an expert to share my problems with.

The second ever episode of the Salesman Podcast that I recorded was with Judy Robinett on the topic of networking.

I put this episode together knowing that selfishly I’d be getting more value out of it than my audience perhaps would.

The biggest take away’s from the episode were –

The last point hit me right in the gut. It was like Conor McGregor had taken a 20ft run up and given me his best shot.

My issue asking for help came down to perspective.

I started giving big value up front by inviting the people I wanted in my network onto the podcast and then peppering them with little requests for help afterwards to keep the interaction going.

These little requests never made me feel inadequate for asking for advice yet they allow me to keep engaged with my network over time.

Perhaps I’m driving around my problem of asking for help here but until I’ve a psychotherapist in my close network to discuss what traumatic childhood event caused this neurosis (there was none) this will have to do.

Speaking to random people and bringing them into your industry network could not be simpler. I only wish I’d have started doing this in my medical device sales jobs rather than now I’m a podcaster.

Building a powerful network is as simple as –

There are hundreds of books written on the topic , thousands of videos on Youtube but don’t over-complicate it.