Dale asks, “How do we get prospects to call us back after they’ve previously said that they are interested?”

Rather than using traditional methods of contacting somebody like via the telephone, use apps like WhatsApp and Telegram. We communicate with our friends with Telegram and WhatsApp, and if you use those apps, you’ll find you have a direct route to the prospect and they’re more likely to form a friendly conversation with you.

Getting prospects to call back is dependent on achieving one thing. You’ve got to get beyond, “Nice to have,” and get to, “Must have,” and if you can get them to must have, they’ll stay engaged in the conversation. If all you do is get it to, “Well, that’s nice. Yeah, I like it,” but there’s no urgency to do anything, they have no reason to stay engaged with you.

Keeping prospects engaged is absolutely huge. You do not call them up and, “Hey, you’ve won the lottery. Hey, I’ve got a timeshare condo.” No, no. I’m sorry. Those tricks don’t work. What it’s all about is you have to realise two things. A, the prospect is predisposed not to call you back. Just accept that. Accept that fact. It’s the same thing that the sun came up this morning, unless you’re in the UK. Then it was probably overcast and you never saw it, but that’s your problem. So accept that, but what I’m going to do is I want to create a compelling reason for you to call me back.

Now, here’s one of the whole things. People make a mistake of leaving too much information, giving them too much information and allowing the customer, allowing the prospect, to be able to make up their mind without talking to you. What I want to do is I want to lead off by saying, “Hey, I’ve got some information that’s really going to impact businesses like yours in the second half of the year. Give me a buzz back. Let’s talk,” or the technique that I love. This is pure gold. You’ve had one conversation with the person. They’ve shared with you one piece of information. So what you do is you call them back and, oh, well, say they don’t answer? You repeat back in your voicemail, “Hey, last time we talked, you mentioned this,” and you say exactly what they said. “I’d like to get some more input as to what you mean by that.”

A lot of the time if you have someone that comes in and they say they’re interested and then they don’t come back and you have to try and figure out a way to reheat them, one of best things you can do is to actually do something that celebrates them a little bit more publicly. If you find a prospect that you have on the hook that is interested but hasn’t found a time to actually sit down and look at the product with you, you got to create urgency in sales somehow. One of the best ways to do this, this sounds really bad, is to use guilt. The best way to use guilt, ask these people to make content with you. Say, “Hey, can I sit down with you for five minutes and record a Zoom or a Skype and put it online on LinkedIn? I want to promote you, not your company.”

A lot of people change jobs once every 17 months. That’s actually the average. The average person changes jobs once every 17 months. Knowing that, what you want to do is you want to try and figure out ways to have excuses to keep in their mind without necessarily bringing up the product. So do some things like that, and now we have content for social selling. You have something you can post on LinkedIn that people can like and tag them, and then all their mutual connections will see it. You’re now keeping that person top of mind, and guess what? When you call them next week and say, “Hey, we’re actually supposed to do a demo. We didn’t do it,” you’re going to be top of mind, and they’re going to be more familiar with you because they did something else with you. They went through a different experience, and you helped celebrate getting them out there in front of other people.

Is to not call them, is to have a call scheduled with them. At the end of the day, if you don’t have it on the calendar, it’s not going to happen because there’s so many other distractions. And then you start getting anxious, so you do it more, which then, all of the sudden, they go, “Oh, he’s going to ask me to do something. I’m not ready yet,” or exchange cell numbers so you can very quickly start texting each other. Texting is so much more intimate and connects two people. It’s very hard to ignore a text versus a call, isn’t it? I mean, ignoring a call [inaudible] voicemail, voicemail. A text, you go, “Oh, well, they know I got it. [inaudible] need to reply.” And then you have it. If they don’t make the meeting and they don’t reply, you know that it’s either not the right time or the why hasn’t been built up enough. 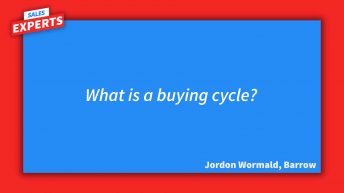 What Is A B2B Buying Cycle (5 Sales Experts Explain…) 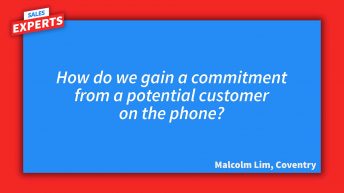 How To Gain Commitment From A Prospect On The Phone