> Tips/Advice > How To Break Through The Fear Of Cold Calling

Nico asks, “How do we break through the fear of cold calling?”

To break through the fear of cold calling, you need to practise, practise, and practise more. So, get on the phone. In fact, you might want to fail on lower quality leads or lower scored accounts, so that you can fall on your face and get back up and ask for feedback. Both from the person you just spoke with that you think you might have failed with, it’s okay to call people back and say, “You know what that was a tough call for me, and I’m sure it was horrible for you. How could I have improved? What could I do better next time?”

You’d be surprised at how many people are going to be constructive with you, and they’ll be sensitive towards the fact that you’re trying to improve. And all of a sudden, you’re not going to be afraid to cold call anybody. And if you’re really good at it, cold calls vanish altogether. So, when you’re finding mutual connections, or you’re finding newsworthy items to open a conversation with, suddenly those calls aren’t cold anymore. And they become really warm and much easier to execute.

So, two things here, we’ve got not take it personally. This is the biggest most important one, the one that nobody talks about. We’ve got not take it personally, and then this, the terrible, sad, boring, mundane truth is we’ve just got to do more of it as well. So, if you’re feeling like you are personally getting rejected when someone slams down that phone or tells you to F-off or whatever horrible thing that they’ve done, well, you shouldn’t. Because you’ve got your outside self, your kind of everyday self that your dog loves you, your kids love you, your partner loves you, your family loves you.

Maybe they all hate you, but you’ve got a desk shark like I’ve got on the table here, and he loves you, whatever it is. You’re a good person at that point. Hopefully, you do good things, and you’re not an asshole out of work. This does not translate to work, in work, you’re not the same person, right? Clearly, you should be doing anything unethical. But you might be told to cold call people, when you know it’s annoying. You might be told to cold email people, when you know it’s annoying. It’s a job. You’re a cog in a machine unfortunately, we can sum it down to this when we’re doing things like cold calling.

You’re a cog in the machine that’s driving leads from marketing, it’s as simple as that. It’s not you personally. So, when someone hangs up, you shouldn’t go, “What, they hated my voice?” It doesn’t matter, it’s not you as an individual. It’s you as corporate Bob, corporate Jill. It doesn’t matter, so just don’t take it personally. And so, once you get over this … and this is a mindset, this can happen in a second. And it might be something that you’ve got to constantly remind yourself of. But once you get over it, it becomes a simple game, just do more cold calls.

You can … and this is somewhat cliché, I think. But you don’t get bothered if you’re brushing your teeth in the morning and you do it slightly wrong. Because it doesn’t matter, you’re just brushing your teeth. If you brush your teeth and you miss a little bit, you go back over it. You carry on, you don’t take it personally, you don’t take offence. You don’t even stop to think about it, right? That’s what cold calling, if you’ve got to do a lot of it, if you’re an SDR, that’s what it’s got to succumb to. You’ve got to literally get on the phone over, and over, and over, and over.

So, cold calling is a key skill. In fact, we often refer to it as a number one selling skill. And I think it’s like any other skills, we have to learn the skill. First of all, a lot of people avoid cold calling. The fear is based on not knowing how. So, I think that we offer prospecting, many of our competitors offer prospecting. And so, you really want to know what are the right techniques and understand why it’s important to your overall goal. We only do things if we understand the relevancy associated with doing them.

So, first of all, is the cold calling important? And do I have the right techniques? So, did I learn the techniques? Many of us learn the techniques, but because it’s a little bit of a … it’s time-consuming. It’s not necessarily a lot of fun. We don’t necessarily apply that on a regular basis. I think we want to set aside a designated time every single day to do cold calling. Generally, we like to see it don earlier in the day. The things that you kind of commit yourself to doing earlier in the day, you do this … we want to apply and then adopt.

This will sound harsh, but if you’re afraid at cold calling, it’s probably because you suck at it. That’s the truth. So, if you don’t want to be afraid of cold calling, invest the time, do the work, practise, get over it, right? We all start with anything that we ever learn, we all start from a place of unconscious incompetence. That’s where we don’t know what we don’t know. Suddenly, someone thrusts you into a place where now you know about it, but you’re still incompetent. That’s conscious incompetence. And that’s where the fear factor kicks in, because it doesn’t feel good to know that we’re not fully competent, and we’re supposed to be.

If you work on it, you will develop conscious competence. That’s where you have to think about it, but if you think about it, you can do it. And still a little bit of fear and trepidation there, but you keep working and you get to a place finally of unconscious competence, where you can do it without even thinking about it. It comes naturally, it’s easy, and it’s not so hairy-scary anymore at all.

Yeah, I’m going to kind of break that down into simple parts. And the first is we really need to nail our value proposition for that particular prospect or subset of prospects that we’re calling on. So, I think for cold calling, again as I said, ideally, we don’t want to cold call we want to warm call or at least we want to warm them up. And I think we should be thinking about how are we targeting a particularly client within an industry or a segment to solve their problem. So, the better we can get at that value proposition that, “Here’s the impact and the benefit of working with us,” that makes it very direct, I think that takes it away from feeling like we’re just picking up the phone and we’re delivering some written script hundreds of times during the day.

So, I think that’s really important. I think the other thing quite frankly is just to practise. And even though in training, we often get pushback that, “Oh, we don’t like role playing, it seems artificial. We’re not really excited about it.” And then after the training, they say, “Wow, that was actually the best part. I really got a lot out of that.” What’s also interesting is even the most senior reps or sales executives that we put into that scenario, we find that, well, often they’re not as great as they thought they were, right? At delivering that value proposition.

So, I think the chance to, in a safe environment, practise those skills, get feedback from each other, and do it to where it really does become more comfortable, now when you’re on the phone, it’s going to be much easier to pick that up and deliver that value proposition. We like to joke that if you’re not practising in a training environment or a safe environment, it means you’re practising on your customers.

And that’s a pretty expensive way to train, right? As you’re practising on those great prospects that you’ve worked so hard to get to the table or get on the phone. “[Leah], let’s practise first doing some role playing, one-on-one, in a team setting, in a training environment with your manager. Whatever that looks like to improve those pitches. 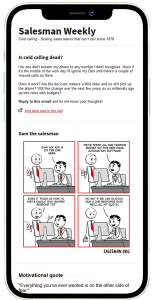