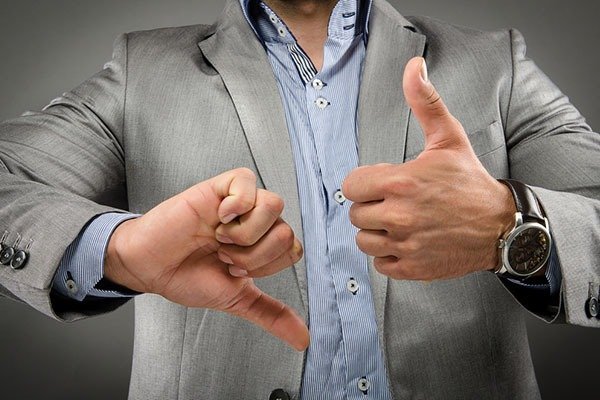 When tell you your sales manager about the massive account you’re just about to close, does he –

If a similar response of uncertainty comes when you meet with a prospect and explain what problem your product solves then it’s likely you’re committing body language suicide.

1) Exaggerated movements and gestures suggest that you’re stretching the truth about the claim you are making. It’s far better to make small, open gestures with your palms showing than it is to be throwing your arms around you as you speak.

2) Looking at your watch is a sign that you’re bored. Your prospect does not care that you have to be with someone else in 15 minutes and it’s a 10 minute drive. They want you to be focused on them.

Noticing when your prospect looks at their watch is a really useful tool. It shows that they’re either bored and you need to liven the conversation up or that it’s time for you to wrap things up and close.

3) Sitting turned away from your prospect suggests that you’re not really interested in what they’re saying. Try facing towards and leaning in at the prospect and they’ll likely become more engaged.

4) Blocking off your body by crossing your arms and legs suggests that you’re not open to what the other person is saying. It shows a lack of rapport with the other person and it’s useful to notice if your prospect is crossing their body with you – it means you need to work harder to build rapport.

5) Inconsistency between your words and your facial expression is a sure fire sign that something isn’t right. When people lie they might say the right words but it’s their face that tells the real story.

If you’re pitching your ‘exciting new product’ and you don’t look physically excited about it, you’re never going to get the prospect to buy into your story.

6) Avoiding eye contact makes you look suspicious or it can communicate that you’re not confident in what you’re selling.  Both of which will stop you closing deals.

7) Rolling your eyes, even if you think the prospect can’t see you (their colleagues might) is a huge sign that you’re bored and you wish they’d stop talking.

8) Weak handshakes generally suggest that you lack authority and confidence.  While a handshake that is too strong could be perceived as an aggressive attempt at domination, which is just as bad.

9) Standing too close to your prospect is a rapport killer. There is nothing weirder than that guy who is always right up in yo face. It shows that you don’t understand barriers of personal space and suggests that you’re also going to make the prospect uncomfortable once the deal is closed.

Although each of these body language blunders sound daft when you read them on the page, statistically it’s likely you fall short at noticing yourself doing at least one of them.

Ask your sales team or sales manager to review your body language in a live sales meeting and see what mistakes you make when the pressures on and you’re in the flow of conversation.