In today’s episode of the Salesman Podcast, Richard Smith joins us to discuss if it is indeed possible to eradicate all prospecting troubles. Further, we talk about the reasons why salespersons experience troubles, the fear of prospecting, how to get over it, and a whole lot more.

Richard is the Co-Founder and VP of Sales of Refract.AI. He is also the author of the book Problem Prospecting?!: Completely Eradicate Your Prospecting Troubles.

“For a lot of people, they just don’t know how to get started. I’m sure there are people that listen to this podcast right now thinking, ‘yeah, I experienced that, but I can get around it.’ Actually, for so many people, they don’t go somewhere to address these.” – Richard Smith

Richard shares his observation on salespeople and the five main problems that they have with regard to prospecting. For starters, most do not know where to start. A lot procrastinate as well for not knowing the tactics and strategies to go about it. Then, there’s the technology that makes the marketplace noisier and harder to penetrate. Ultimately, salespeople develop fear in prospecting and selling.

“Young people getting a start in sales, SDRs, BDs, as an example. All they’ve ever known is that spare bedroom. They’ve never met their manager in person. They’ve never met their colleagues and they’re expected to be ‘on it’ ― create new conversations with their target audience. They’re experiencing all those things that I mentioned. They feel a bit isolated and cut off and a little bit lonely.” – Richard Smith

The Fear is Rational and Real

Will and Richard also discuss how the fear of prospecting holds salespeople back from their potential. To illustrate, Richard shares how he first started as a salesman and how horrific it was for him to pick up the phone. He then realizes that to be able to address the fear, you have to completely remove yourself from the outcome of the call.

In addition, he quips that to widen one’s perspectives, one must believe that this isn’t a reflection of oneself. This is just a sales call.

“The fear of prospecting almost feels like you failed and it strikes that you want them to go and pick up the phone again. If you just have the mentality of ‘hey, all I’m doing here is finding people who either want to talk with me more, have a problem that I know I can help solve, or find people who have a problem that I can help solve.’ That’s the objective.”  – Richard Smith

“Knowing you are totally happy, even if you find people who you can’t help right now. Then everything else after that just feels easier.” – Richard Smith

Break Through The Noise

Richard shares his thoughts on how we can break through the noise this 2021, both in the marketplace and media. He continues to discuss the ways salespeople can get the attention of potential customers, Furthermore, he also talks about the place wherein both marketers and salespeople can learn from each other.

“I feel even though this message has been hammered home many times, I still am over the course of the year. I keep getting a handful of approaches from salespeople, which I would describe as personalized and relevant. It’s tough to break through the noise because the more that you don’t understand it, the more difficult it is to grab someone’s attention.” – Richard Smith

“You start to assume that the stuff that’s coming in your inbox next is just not going to be either of those things. This does punish, in some respects, the good salespeople out there.” – Richard Smith

Richard Smith is the Co-Founder and Head of Sales at Refract, software which enables sales leaders to rewind their conversations, and see how, and where their deals are won and lost. 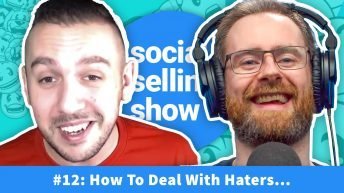