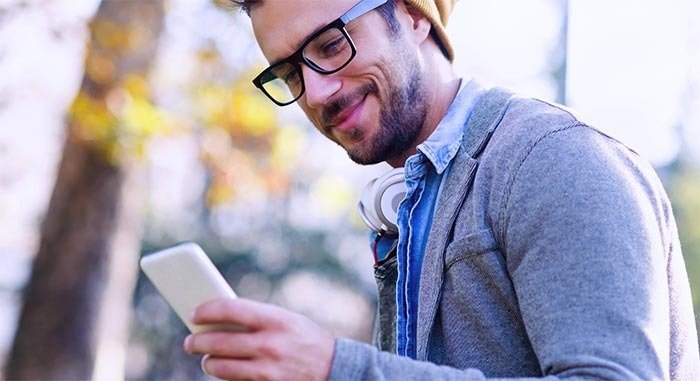 Even if you’re not cold calling, you’ve embraced the world of social selling and you’ve done everything you can to avoid closing deals on the phone… eventually it’ll happen.

Your hand will be forced, there will be some kind of emergency, you’ll need to pick up the phone and dial it like it’s 1995.

“Crap, what if no one answers?”

You haven’t prepared for this moment. You haven’t had to leave a voicemail for years and the sales sweat is starting to drip from your eyebrows.

Not to worry, you’ve hit this article and we’re going to show you the 6 steps to leaving a killer business voicemail message –

1) Write it out first

You don’t need to sit and write a business voice mail pitch each and every time you pick up the phone but it’s sensible to have a generic one available to you.

This stops you waffling on and boring the crap out of your prospect.

The first barrier you need to get over is that the prospect immediately thinks you’re spam.

You need to establish that you’re a credible sales professional that’s calling and not some call centre shmuck.

You need to demonstrate that you’ve researched your prospect and you consider it well worth their time to listen and perhaps respond to your voicemail.

Droning on about features and benefits won’t cut it here.

“I’ve just been on the phone with the CEO of your biggest competitor and they’d like me to come in and discuss how we can further improve the service they can provide to their customers. Would you like me to do the same for you?”

No “call me back please”.

You know you can help the prospect so don’t be scared of making them do a little work.

You need to have a clear call to action when you leave a voice message.

Interestingly it doesn’t have to be “call me back”. You want to stand out right?

5) Tell them what you’ll be doing next

Don’t give up control of the conversation so easily by putting the ball in their court and asking them to get back to you at their convenience.

You’re a busy guy too!

Or you should be if you’re really offering massive value to your customers.

You don’t have time to hang around waiting for some prospect to return your call.

Tell them you’re going to…

Send them a text. If they can’t answer the phone because they’re in a meeting, they’re not going to be able to listen to their voicemail to respond either.

However it’s almost socially acceptable now (even though I hate it) to email/text on your phone during corporate meetings.

Texts work better than emails because –

So send a text asking when they are next able to take a phone call and then continue the cycle.

Tell them you’ll then send an email to follow up.

Then an in person visit.

Then a hand written note (written in the blood of your competition).

You get the point.

Keep grinding the prospect down until it’s clear they’re just not interested or they don’t have the budget.

Again, as long as your initial prospecting has shown you that you’re in a real position to add value to their business it would be rude not to hammer them with contact.

It’s your duty as a salesperson to do so!

Don’t stress too much

Now don’t expect a call back.

No matter how slick your voicemail was, it likely wasn’t good enough.

Really, leaving a voice mail is just an opportunity for your voice to sink into the prospects subconscious which makes you more recognisable when you do finally catch up with them.

The most important step in this post is the text immediately afterwards.

I get a response from the follow-up text around 30% of the time and it enables me to quickly schedule a phone call with them with a few more back and forth.

Make sure you’re sending it.