Sam asks, “What can we do post-sale to build a network of influence within a key account?”

I think it’s back to account mapping. We want to map that account. I think so often, particularly if things are going well, we have a key contact we’re comfortable with, we’re doing business on a regular basis, but customers are reorganising all the time. Priorities are changing. So when things are going well, we seem to be very, very content with the person we’re working with, but we really haven’t navigated the account to go deeper and wider. First of all, there may be additional sales potential within that account. Also from a defensive standpoint, we want to have a lot more contacts and really a broader context of what’s going on overall within our customer. So I think that the temptation is we’re doing well, we’re getting the business, I’ve got my contact, I know Will, he’s a great friend and buyer, but we aren’t really navigating what does the overall landscape look like, what are the business priorities? Who else should I be meeting? Particularly since things are likely to change. We just don’t know when.

If you’ve never done this before, you’ll find it’s really a good activity. And that’s to make an account map. You can look it up online. There’s all kinds of stuff out there about it, but it seems to be a little old fashioned. I still think it’s fantastic. An account map simply puts all your contacts in one place. You might start with your primary contact right in the middle, and then you’re going to draw lines that show the connections between people. So your primary context says, you know, I’ve got to talk to the CFO. Now I’ve got a dotted line, I’ve got the CFO. Well who does the CFO work with and who else is influencing this decision? Maybe it’s the folks over in the billing department. I better talk to somebody over there, at least know who it is that’s going to influence the decision.

Whoever shows up on that account map, when you get those names, when you hear those people who are influencing, when you hear new opportunities in the company that you can pursue, your account map is, it’s your pathway. It leads you from one person who you know and can make an introduction to the next and the next, and pretty soon you can be linking in on various social media, driving some content into those new contacts that will be a value to them and demonstrating your relevance and value to all of them.

I see a network of influence as a network of advocates or champions. You’ve got to start small. You’ve got to have one. So for me, medical devices, that’d be typically the surgeon. I’d be spending so much time with them, go through demos, go through the pricing of things, explaining the benefits, all that good stuff would be with the surgeon essentially. So I’d build Mr. or Mrs. Surgeon into an advocate. They’d be singing my praises within the account and they would be introducing me to other surgeons. So that little network starts to grow there, right? Next, you’ve got to plant the seed in. For me, it’d be procurement and finance, depending on the size of the deal. You’d have to get someone in procurement involved. They’d have to know, like, and trust you. They have to have this, even if it’s a perception in their mind, because clearly the competition can be good, great, shit, bad, fantastic. It’s irrelevant. But if they think that you’re the easiest person to work with because they got the perception of that, because you’ve told them, for example, we’re the easiest people to work with, then they’re going to start spreading that within their little network.

And then your colleagues who are selling similar products are gonna be able to sell in there. And it’s just this network starts to mash, but it all starts with that one individual, particularly in each department. That’s the first goal. Each department that the buying process goes through. That could be procurement. For me, medical devices again, it would be the IT department. It could be biomedical, electrical engineering, wherever that acronym was. I can’t remember now, but we’d have to have an advocate. Each one of these, maybe there’s one person. That’s all we need and that’s our little network of influence then. And this can really only happen once the sale is completed. We only get this deep once our product’s there, once we’ve got an excuse to be called and go out and seeing how things are going. That’s when we get to double down on all of this.

To build a network of influence, whether it’s within accounts or in life, you have to get to know people personally and professionally. The two should blend as well because many peoples personal lives are their professional lives. Your task is to uncover what matters most to the people that you’re doing business with so that you can serve their purposes and help them get where they need to go and remove obstacles out of their path so they can go from X to Y and move the needle in their organisation. The better you get at that, the much easier it’s going to be to build a network of influence over and over again.

Oftentimes we close the deal and especially for a salesperson, we close that deal and we’re kind of done, right? Maybe we hand it off to the delivery team or the product support team and we’ll check in occasionally, but we kind of forget, versus I think we should now look at that opportunity to grow that account, to expand that relationship, to become very sticky. The first thing I do is make sure we’re connecting with everybody that we interact with. So you know, LinkedIn is a great way now to reach out and say, wow, you know, the fact that we’re working together, I’d love to connect with you on LinkedIn. Now we’re connecting to that person who probably is connected to hundreds of people within that organisation. So we’ve just expanded our second level connections exponentially. We want to be mapping all of those people that are involved in the account so that we’ve expanded our footprint so that if we post something, if we’re publishing content, anything we’re doing, now they have better visibility into that. And that just expands our footprint.

And then the second part that I would say is do things that are increasing our influence without expecting anything directly in return. So that may be just going out of our way to provide some additional content, or hey, I thought you might appreciate this article. We’re going to do this presentation. I want to do invite you to this offering. So little acts of kindness, if you will, but that we can do, paying it forward without expecting anything immediate in return, but it is going to elevate I think our status, elevate our influence, grow our network. And then ultimately there’ll be coming back to us saying, wow, we respect and trust and appreciate you guys. We want to do more business. 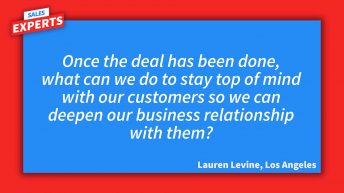 What Can We Do To Stay Top Of Mind With Our Customers? 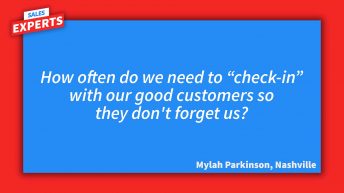 How Often Should We “Check-in” With Our Best Customers?

How To Carry On The Conversation After Someone Becomes A Customer