Cory asks, “What is the biggest leverage way to become more charismatic?”

So I think one thing that people don’t do enough of is, you want to be authentic but you also want to be a chameleon. And what that means is, before you go and hop into a call with someone, deep dive research. Find out what things they like. Find out what movies they like, what bands do they like? You can find this stuff on Facebook. Hit the About tab, and you can go look at what people like on this stuff. Go look at their Twitter account, see what things they’re tweeting about. Find things that you both share that are authentic in common, and you’ll be surprised how many people you can become friends with.

Think about it from this perspective. I remember when I was in high school I became friends with this guy named Josh Payne. We sat next to each other in bio for six months, didn’t really ever really talk to each other. We sat next to each other ’cause the alphabetical order, and it was our first period class. So they would do it for attendance and stuff. One day, I said to him, I got a test back and I got a good grade, and I yelled out in a Sean Connery impression, “The day is mine!” Like I said it like, referencing Celebrity Jeopardy from Saturday Night Live, and he ended up making a reference back, and we kicked off a friendship. The guy was in my wedding party last year when I got married. This all started after knowing him for six months and not even connecting, because we found something that we had in common with each other. We both gravitated toward each other for a common interest.

You can do the same exact thing with your prospects that you’re working with and with the customers that you work with, so that you can guide them down this path of having a good relationship with you and being charismatic. Find things that you have in common. And as a sales rep, if you’re listening to this, what you need to do is you need to be into things. Be interesting. Go find hobbies that you can get into. Don’t just do sales. Find things that you like doing, try things you’re not comfortable with. Find some hobbies, so that you can build off of that community and have something you can work from outside of sales.

I found the simplest thing is just smile, whether you’re in person or whatever. A smile kind of disarms people, and I remember there was this guy at my same company that I worked for, so he flew into town and he comes into my office. And I get up and I put my hand out, and I give him a big smile. He shakes my hand and he goes, “You’re a hard guy to be mad at.” And you just, you know, start at a different level. Maybe have a funny story that you typically tell. Or you just are able to have a little bit of small talk before you start talking about business. And just be a little bit more animated and charismatic.

I was lucky enough to meet Bill Clinton once, by accident. I was riding my bike and he was having lunch at this restaurant, and you could just tell he had this huge smile, and he made eye contact with you, and he had that thing. That his wife never had. And I just remembered that so well, because he wanted to come talk to the crowd, right? He could have just got in the limousine and taken off. But he liked connecting with people. And I think that part of sales is overlooked. It can be overvalued too, because you need a lot more behind that than just a handshake and a smile. But it’s a great way to break the ice.

I don’t know how you teach charisma. ‘Cause some people are, I’ve been told I’m charismatic, and some people aren’t. They’re very bland. So the thing you have to start with is, what is the single thing that excites you more than anything? And record yourself. Do a video of yourself talking about that single thing that’s more exciting to you than anything else. And then record a comparison video of you talking about what you sell, and see the difference. So if there’s no difference, it’s hopeless. If you can’t get charismatic about something you’re excited about, you’re not gonna get charismatic about the thing you sell. If you are charismatic about some other thing and not about what you sell, then you already know how to be charismatic. You just have to convince yourself that what you’re doing is as exciting as that hobby or that interest that you have.

One leverage way to become more charismatic is to break patterns. We are surrounded by behavioural patterns that exist in every area of our life. If you want to get really deep, it holds society together. Now, what am I talking about, patterns? Well for example when we meet somebody, we might reach out our hand to shake their hand. That’s a pattern. And everybody knows that pattern exists and people go along with it. And that’s great because it keeps a level of trust. We have patterns to lay down a foundation of trust. Just like if I say, “Hi, how are you?” You’ll likely say, “Good, how are you?” Every time you can break a pattern, you’re now different. You’re now new. You’re spontaneous. Your real personality is coming out. Kids are really charismatic, and they’re really good at breaking patterns.

And that interaction was completely different from every interaction that the staff member had had that day. And we didn’t wait very long, and we got really good seats. Because it created an emotion in that person. So, if we can nail this down into one thing it’s, take more risks. What is risk taking? Risk taking is about breaking patterns, and breaking patterns is sexy. So look for any pattern in your life and break it.

Could be when you’re filling your car up with petrol. The other day I walked into a petrol station and the gas attendant’s there and he’s putting the thing through, and I said, “How is your day?” And he said, “Good, how is yours?” I went, “Good.” And that would have been the end of the conversation. It’s so easy to just let a conversation die out at that moment, once the pattern’s been played. So I said, “Have you had any robberies today?” And he said, “No, not yet.” I said, “Ah. Don’t worry, I’m not a robber. But I might be tomorrow.” And he said, “Well, you know what? This place has been robbed so many times that I’m not even scared any more.” I said, “Ah, what? You take all the fun out of it. Okay, I’m gonna pick on that guy tomorrow.” Well, we had a really fun conversation and every time I go into that gas station he waves. I don’t know if he’s afraid of getting the store shot up, or it’s changed the dynamic of our conversation. So that risk taking is what sets you apart. And that’s what charismatic people do. Do it as well.

The easiest way to become more charismatic is simply doing, well, it comes down to two things. Showing true interest in helping people. And you do this by letting your personality come through, but let me build on this. It’s a concept, what I call legacy leadership. What I want to do is, I want to create legacy leadership in everybody I meet. My goal, I start off each day. I want to influence and impact positively every person I meet. See, it’s not to sell. It’s to influence and impact positively each person I meet.

My goal, and I don’t say this from an ego standpoint, I say this from just a goal standpoint. I want people 20 or 30 years from now to look back and say, “Hey, their relationship with Mark Hunter. That was really cool. I really learned a lot.” To me, that’s the mark. Because you and I both have people in our lives who maybe we had as a teacher, maybe we had as an early boss, somewhere along the line, that made a huge impact on our lives. You see, I want to be that person to people I come in contact with. So when I’m focused 100% on helping you.

And there’s a definition. I used the word ego earlier, let me give you my definition of ego. It’s not what you think. E-G-O. It’s Empowering Greater Outcomes. My whole objective is to empower greater outcomes in everybody I meet. ‘Cause my definition of leadership is the same as my definition of sales. I want to help others see and achieve what they didn’t think was possible. Boom. That’s huge. 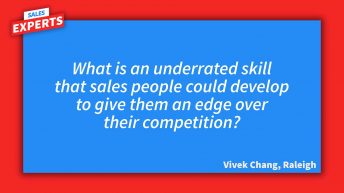 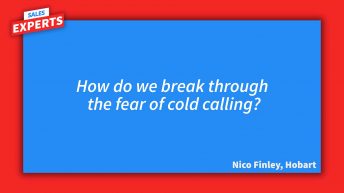 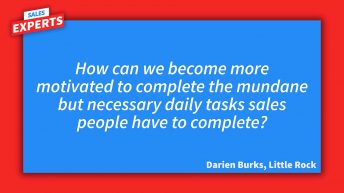