5 Unusual Methods For Getting The Attention Of New Potential Customers

Martin asks, “Do you have any unusual methods of getting the attention of potential customers?”

My mentor used to always say to me, “Claude, don’t do what everybody else is doing, be original. Be unique, be creative.” This is sales, it’s an application of science and art. The methods I do, I have a specific method in marketing, and I believe in something called virtual attraction.

I don’t spend any money for marketing, Will. I think all of last year, we spent $900 on a couple of Facebook ads or something like that. I literally spend no money for marketing, whereas my competition my spend hundreds of thousands. How do I do it? I put out a lot of good non-commercial, contemporary content. People have come to me, “Claude, you’re putting out better stuff for free, than what I’m paying for, and why do you do that?” I do that because they call me, they schedule with me, they text me, they email me. I virtually attract people by the content I put out. I don’t think anybody else puts out the quality of videos that I put out. All about qualification, cold calls, questions to ask, the psychology of sales, the art form.

So the answer to your question is to be yourself, give people unbelievable value, because they don’t know who you are. You’re a secret. And that’s my premise in marketing. Nobody woke up this morning and said, “Gee, let me call up Claude Diamond and give him a shit load of money, and make Mrs. Diamond real happy.” They don’t know who I am. So the only way I can do it is by marketing towards this wonderful, remote-controlled, gateway device to the universe.

Somebody today is going to go into Google or Yelp or Facebook, and they’re going to search for the products and services that I sell. If they find a video that’s entertaining, and that’s informative, that’s non-commercial, doesn’t have pop-ups or banners or anything. They might say, “Hey, this guy’s got something. Let me watch some more videos.”

So be yourself, be different. Give people wonderful, non-commercial and contemporary content, and you’ll see magic happen all the time.

What I advocate is put on your walking shoes. Go out, buy a box of doughnuts, and go out and visit the customers face to face. We’re so behind screens, and doing emails, and following up on LinkedIn. I’m guilty of it, too, that we just have lost the ability to just go up and talk to people, and visit people. It’s a lost art. It’s how sales used to be done 50 years ago before the advent of all these technologies, and nobody’s doing it anymore. So go down, buy a box of doughnuts, find the person’s physical address, and walk them in. And then just be like, “Hey, is Bob here?”

I mean who knows? If he’s there, then you have a doughnut, and give him your card, and you’re off to the races. You have a new friend.

It’s what I do when I’m selling the ad space and sales and podcasts, and this shouldn’t be unusual, everyone should be doing this, is I send video emails. I use a company called bombbomb.com. Super simple. It’s relatively cheap to get going. You record it from your phone, from your laptop, just as you go through. And the email itself sends them a clickable animation of parts of the conversation you’re having in the video. They click on it, the video pops up, super seamless. You can’t go wrong of it. You don’t need to be a tech-head to help you how to put these together.

Well, almost every single time I send a video like that, rather than what people are used to, which is a spammy SDR email where two lines have been customised, and the rest of it is just a pitch. When people get these videos, almost every single time I get replied back almost immediately saying, “Thank you for taking the time to send a video.” And then you get into the conversation, you start building relationship. All that good stuff comes afterwards. But for the sake of spending 15, 20 seconds per email just doing a quick video done from the webcam on your computer, that’s a no-brainer for me. And that’s what I use when I sell the ad space on the show.

When I do presentations I will often use props to grab people’s attention. So when I was in medical device sales, I would walk into a room full of doctors and nurses. I’d walk to the front of the room with my bag. I’d set it down on the table, and out I would pull a real pair of metal handcuffs. And I would hold them about a foot off the table, and I would drop them, and they’d make a loud thump on the table. And then I’d just continue setting up. In my mind I’d be counting 1001, 1002 with a, “What the?” Somebody would always point to them and I’d say, “We’ll get to that in a little bit” And then I’d begin my presentation. They listened to every word, until I weaved the prop into the story.

I was selling a device that … Traditional devices that hospitals were using were very labour intensive. It required the nurse to manage the device, instead of managing the patient. So in an essence, they were handcuffed to their technology. And what we allowed them to do was to actually take the key, and take the handcuffs off, so that the device could run itself. And they could actually focus on what mattered most, which was patient care.

And I haven’t done it, but we get all the holiday cards around the holiday season. Because we want to remind people who we are. Well, why aren’t you sending them in April, when you actually really need to get a hold of them? Rather you why just waiting until the holiday season. And I think that’s something that people could and should incorporate into their strategy. 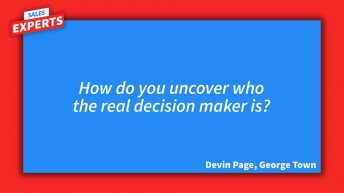 How Do You Uncover Who The REAL Decision Maker Is? 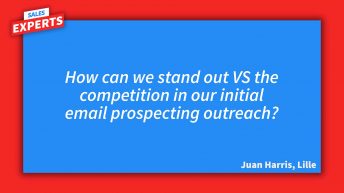 How To Stand Out Verses The Competition When Cold Emailing 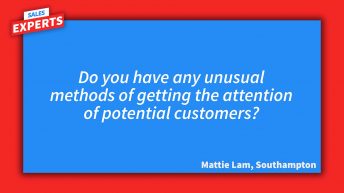