So, with that in mind here are the five platforms that are most effective right now the prospecting in B2B sales.

You can dive into influencing over email in our email course but the main thing to note here is that you should not get lazy with your emails. They should share something that you have in common with the prospect to build report just like a phone call. They should be somewhat bespoke even if you are using templates, so the prospect doesn’t feel like you’re spamming them.

And you should place your biggest focus on getting your email opened through using interesting subject lines. Remember if the email does not get opened the rest of what is inside it does not matter. Essentially, it doesn’t exist.


You should place your biggest focus on getting your email opened through using interesting subject lines.

Do not underestimate the power of your personal brand with emails. If Richard Branson emailed you you’d open it in a heartbeat because you would recognise his name. If you’re struggling to get your emails opened perhaps it’s time you take a look at your personal branding within the industry that you work within. The CMO Council recently found that 9/10 B2B buyers are heavily influenced by online content before making a decision on a purchase, so even something as small as giving your brand a little makeover with a bit more individuality will make you more likely to spark the attraction of prospects.

It’s a bit like changing your Tinder profile picture, maybe that haircut or that shirt you’re wearing just isn’t what the girls are after. Once you stop trying to be like everyone else and bring your own personality into the mix, then that’s when you’ll be getting more attention, both with the ladies and with potential prospects.

In years gone by, the cold call and the phone in general were the places where most B2B sales prospecting was done. Those massive mobile phones that looked like plastic bricks were the bedrock of Wall Street in the 1980s, believe me. Nowadays this is less common as clearly people answer their phones much less frequently to people that they don’t recognise.

Check out the phone selling course for more information on how to sell over the phone but it is worth noting that whether you are using email, social media, text messaging, or in person prospecting platforms, most of the qualifying and objection handling is usually done over the phone after you are a few touch points in. People want to know who they’re talking to after all, both literally and figuratively.

If you’re scared of the phone (which I have been in the past when I first started my career in sales) this is a fear that you must get over.

The most important part of any prospecting phone call is to get a commitment from the prospect. For sure qualify them where appropriate but get that commitment for the next call if nothing else.

In our procrastinating course I often joked about how social media can be one of the main reasons people procrastinate so much. But believe it or not, it does have a purpose in the workplace beyond the simple pleasure of funny videos of squirrels wearing water-skis to make you laugh for a couple minutes. Social media is actually a great place to put in your touch points and to break out of obscurity with your prospect.

But I beg you, don’t believe the hype of social selling. Things may change in the next five or 10 years but right now it’s very unlikely that you can go through the whole of the sales process, or even just the whole the prospecting process on social media alone.


The biggest benefit of social media for sales people is in the Intel gathering. As people lead a more public life it is easier to find commonalities.

The biggest benefit of social media for sales people is in the Intel gathering. As people lead a more public life it is easier to find commonalities, and trigger events such as people changing roles which allow business to be done where it wasn’t able to be done before.

If you bring in our warm lead from social media you must move it to the phone and email immediately.

Check out our social selling course for more information on all this.

Text messaging is a prospecting platform that is massively underutilised by B2B sales professionals. This might change in the future as more spam comes through text messages but right now, research shows that most text messages are read within three minutes of being received. People are programmed to reply to a text message when it’s on the screen rather than saving it to an inbox for processing later on, because of this you get a reply pretty much instantly when you send a text message to a prospect.

Additionally, it is socially acceptable to reply to a quick text message during a meeting, right there and on the spot. Meanwhile, if you get an email in a meeting you’re 1) less likely to open it and 2) more likely to push it back into your inbox and deal with it a later date.

It is important not to try and sell in a text message because there’s just not enough bandwidth with the amount of text you have got available on the screen. But it is the perfect platform to ask the qualifying questions for example.

Also, if there is a very important piece of information that has been emailed over it can be wise to send a quick text message just to confirm that the prospect has got the email to prompt them to process it. As you will find in our influence course getting someone to commit to accepting a document influences them to read and process documents and get back to you quicker.

Don’t forget about in-person meetings. When I first started in medical device sales I spent a lot of time driving round to get those initial prospecting appointments with surgeons that I’d never met before. There is no comparison to the ability to build rapport in person with an individual versus any other platform. Even the inside salespeople watching this should take note, if you got the opportunity to meet with one of your prospects in person, jump at the opportunity.

It doesn’t matter if its outbound sales calls, stalking people at events and conferences and introducing yourself, putting yourself in the position were you just happen to bump into that big prospect on the golf course etc… Just get in front of them and you’ll have far more chance of closing a deal.

Until virtual reality is standard in all conference rooms, the competition who have the opportunity to prospect in person or at least follow up and close deals in person will always have an advantage over you.


Face-to-face makes rejecting someone very tough.
When you’ve got to look the person in the eyes, most people aren’t confident enough to be rude to their face.

Face-to-face makes rejecting someone very tough. It’s much easier to be rude over the phone and then hang up and not think about it and not worry about the consequences. However, when you’ve got to look the person in the eyes, most people aren’t confident enough to be rude to their face.

Additionally, you have more control over the situation because you can judge people’s body language and how interested they are in speaking with you a lot better in person than even over the phone.

One final note on in-person meetings for all you field reps is that you should never drive somewhere when you have no appointment. Always call ahead and book at least one appointment in the area that you will be spending time in and then of course go crazy and cold call the people around that area. More time is wasted by outside field reps driving around aimlessly than any other activity. You could say it’ll drive you mad…moving on…

We have a full course on referrals because I know it is that hugely important to you as a B2B sales professional. The benefits in prospecting by referral are –

• The lead is a warm one because trust has been transferred from one non-sales professional to another non-sales professional. The presupposition is that the original prospect that made the referral would not have done so they weren’t clearly happy with product service that has been delivered to them. That puts you in an amazing starting positioning with the new prospect.

And there we have it that was a quick overview of all the main prospecting platforms that you should be focusing on in the B2B world. I’m super excited about how VR can change B2B sales but that one is still not quite relevant right at this moment. We’re not quite at Ready Player One-levels of technology just yet.

The first step to deciding the platforms you and spend time on is to work out where your prospects are spending time and where you can get in front of them. 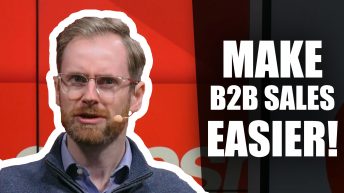 How To Find BIGGER and BETTER Customers 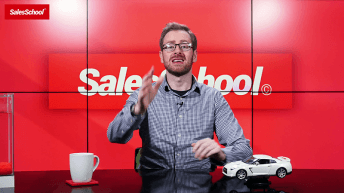 The Does/Don’t Of B2B Sales Messaging 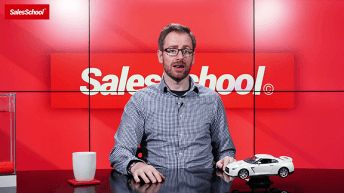 Why You Need To “Break Through Obscurity”