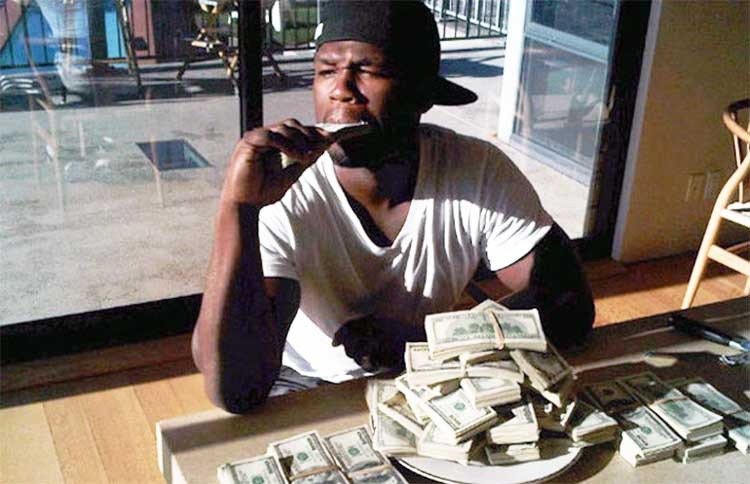 From 6am to 9pm all I think about is money.

Even though I know I’m wrong, I still think money makes me happy.

Am I happier now than when I was a kid and didn’t know the value of money? Nope.

Am I happier now than when I was at University and had a minus figure in front of my bank balance for 5 years? Hell no.

There were some nights that I had to sneak into the student union to go and dance next to girls (and not speak to them) because that £2.50 entry fee would have pushed me over my overdraft which would have meant yet another unfathomable £30 fee (f-you Halifax).

Back then my happiness was in a paradox. I was skint and so I needed money. But when I started to make a decent wage, I started stressing about money and so became less happy.

My net worth was my life’s worth.

And I blame it all on working in sales.

I still think about money constantly. That’s perhaps a side effect from loving closing deals so much.

The chase. The close. The spoils of “adding value”.

I have a grin stretched across my face when I get paid and I see that number on the ATM (which finally no longer has a minus in front of it) go up.

However along the way I have found a number of other things that I find more valuable than money.

This is the article that I wish I’d read when I first jumped into sales.

It’s a kick in the ass for me to live in the moment and worry less about closing that sponsorship deal for the Salesman Podcast this afternoon which has now stretched over weeks of back and forths.

My Mum has cancer, all over. She’s a fighter and so she’s still here.

I value time with her, my Dad and my brothers over everything.

There would be no question in my mind if there was a choice between closing a deal and spending time with them.

Money is infinite. They’re printing new notes all the time to devalue what you’ve currently got to keep you in the game.

Your family won’t be around forever which is why I value them so much higher.

In my office right now I’ve so much crap. Stuff I’ve bought in the moment, used twice and then didn’t want to throw away because I know how hard I worked to get the cash to buy them.

They’re a constant reminder of regret.

I should really bin everything and start again at some point.

I’ve never been on a holiday or trip and felt regret. Even if it turned out to be a complete nightmare I’ve always laughed and joked about it afterwards.

Experiences are more valuable than money because they can’t be taken away from you.

Even if you love sales like I do, you should be working to convert that cash into experiences.

Like my Dad says “You can’t take the cash with you…”.

A lot of the money that comes through Salesman.Red and into my back pocket gets given away.

I’ve never told anyone about this before. It’s our little secret.

The only thing that makes me happier than spending time with my family is knowing that I’ve helped other families become closer too by donating to the certain charities.

It feels amazing to make a difference. It’s difficult to not tell everyone how wonderful I am for donating.

It just puts everything into perspective.

Every time I’ve been really broke I’ve gotten peace knowing that there are people all around me struggling way more than I ever have.

This makes me man-up, get shit done and get back on top.

Sales gets me down.

I’m never bothered by one rejection but after 25 emails go unreplied, I’ve no sponsor for the podcast this month and then someone comments saying “I’ll never get those 3 minutes back. This sucked” at the bottom of every post. I get a little down.

Money can’t buy watching a crappy comedy with my girlfriend who laughs at everything.

Well I guess if you paid her enough she might watch something with you (but that’d be weird).

Her laugh is infectious, it grabs me and doesn’t let me go until it decides to like a winter flu.

The laughter is in total control which gives me a release.

I’d be happier spending an afternoon with her laughing than I ever would adding zeros to my balance.

When I go through a patch of not working out I feel crap. I’m constantly bloated, I have a mist running through my mind blocking my thoughts.

The value of being in great shape and looking like a boss transcends any financial statement.

Until you’re in the multimillionaire club being in shape has a bigger impact on how others treat you anyway.

If you’re waiting until you retire to get in shape, spend time with your family or chase those life experiences you’ve always dreamt of, remember a huge percentage of people die in the first year of retirement.

They don’t get a chance to spend the money they’ve saved.

Your money will disappear in a generation or two. Your grandkids will likely be dicks if you give them a bunch of wealth they haven’t had to fight for.

However your DNA will potentially last forever or at least until we nuke our planet to bits.

Your DNA is your true legacy to this world.

1 in 200 men are direct descendants of Genghis Khan. Do you think his pillaged gold coins are still used by his family to buy lunch?

I’m not saying run round having unprotected sex. I am saying that having a partner is important.

I have to remind myself all the time that I am pretty freaking special.

The chance that I exist at all is an incalculable one.

Then at the other end of the scale, with the size of the universe we are all so insignificant it’s indescribable.

Like, literally I’ve just spent 5 minutes trying to think up a way of beginning to describe it and I’ve given up.

(Want to have your mind blown as to how insignificant we really are? Click Here)

There is no person, company or government on this planet that has enough capital to create a human being from scratch. That is why we’re all worth more money than what could ever be printed.

I still love sales but I love life more.

I’m still chasing money but these days I use it to make me happy.

If I would have read this 5 years ago I would have spent more time with my family, worried less, gave more away, have 6-pack abs and I’d still be working in sales.